Tromsø is considered the capital of the Arctic and is located on an island, Tromsøya, almost two hours by plane from Oslo. It was the starting point of the great explorations to the North Pole since the mid-nineteenth century and the polar adventures of Robert Peary, Frederick Cook and Ronald Amundsen. The jagged shores of the fjords and the impressive steep snow-capped peaks that surround it give the impression that beyond them, nothingness begins. 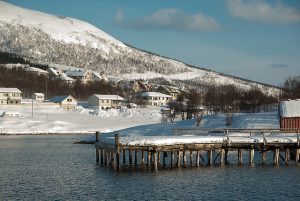 This small city becomes the gateway from Norway to the Arctic, as it is about 350 kilometers north past the Arctic Circle. Its location is what allows phenomena to be as special and unique as the midnight sun – from May to July – and the polar night – between September and March. At any time of the year, it is a most exciting destination.

When landing in the small airport of Tromsø-Langnes, the best thing is to rent a car. The public transport is excellent and useful but with a car at your disposal you can freely explore the surroundings of the city, discover such incredible places as the Ersfjorden fjord – a small village, about 30 minutes east of the center of Tromsø – or go along the coast of Kvaløya -one of the many surrounding islands- , surprise yourself with the beach of Brensholmen and reach Senja by ferry to go in search of whales and killer whales.